From The Bellingham Herald: 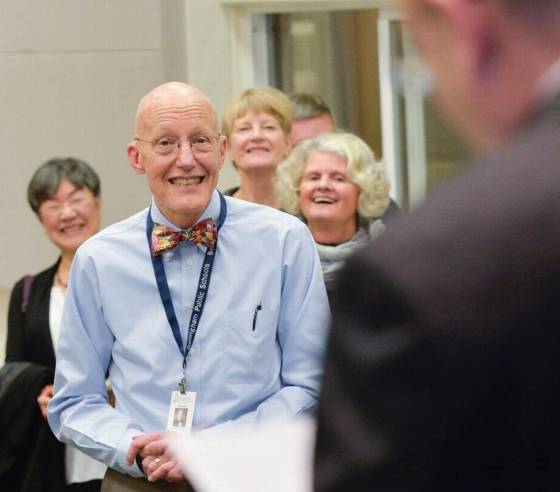 Bellingham School Board member Dr. Ken Gass listens to Superintendent Greg Baker’s speech honoring him during a retirement party for Gass on Nov. 16, 2015, at the school district office. Gass, a pediatrician, served 17 years on the school board. Philip A. Dwyer pdwyer@bhamherald.com

Ken Gass isn’t thinking of his last day on the Bellingham school board as a retirement.

After 17 years, he says his final school board meeting Thursday, Dec. 10, represents something more like a graduation. That’s because his work in the community, especially in early childhood education, won’t be ending anytime soon.

Gass, a former pediatrician of 35 years before retiring from his practice in 2012, was appointed to the Bellingham School District board in 1998 and won re-election four times. He announced his retirement from the school board earlier this year.

His dedication to early childhood education stands out among his contributions to the Bellingham community. His and the district’s commitment to that cause, he said, will continue for years to come.

I was advocating for kids in schools not knowing that, you know, the schools really aren’t funded. Ken Gass

Quenby Peterson, a parent of two kids in Bellingham and a district volunteer, will take his seat on the school board.

“I’m still very motivated and district staff is a very committed staff,” Gass said of his decision to move on. “We need new people to come on and take the challenge forward.”

Gass, now 69, was active in the community long before he was on the Bellingham school board. He served on the Mt. Baker Planned Parenthood board of directors from 1979-1985, and was on the board for Whatcom County Commission on Children and Youth from 1990-1998. And those are just a couple of the many organizations he has worked with to advocate for education and health care for children.

Gass said he has always liked working and being with kids, which was part of the reason he became a pediatrician. That eventually led him to the school board.

Significant progress in early childhood education has been made in the last decade, Gass said. Bellingham was quick to implement full-time kindergarten for all students in all elementary schools starting in the 2011-12 school year. The district also has developmental preschool programs in place in five elementary schools.

Earlier this year, the district permanently established the Promise Kindergarten program, or Promise K, which is a full-day, early-entrance program for children in the Bellingham School District scheduled to start kindergarten the following year.

“Promise K is getting a pocket of very needy kids a wonderful preschool experience that you really need. But that’s by no means all the kids that need that, yet are not getting it,” Gass said. “That model is one that we would hope we would find ways as a community to expand so that every kid whose family could not afford quality preschool got it.”

Gass will keep advocating on behalf of children’s needs following his retirement. He will continue his work with Whatcom Taking Action, a group working to provide support for families with special needs children.

Gass’ impact on the community was evident at a Nov. 16 reception at the district office. Family, friends and members of the community, including past board members and superintendents, attended in support of Gass.

I think them coming out to support my retirement is really to support the district and the job they’re doing. Ken Gass

Everyone at the reception wore bow ties, honoring a Gass hallmark. The bow tie tradition started, he said, because, as a pediatrician, long ties would get in the face of his patients. Yet he has continued to wear them and has enough bow ties in his closet to wear a new one every day.

Bellingham Superintendent Greg Baker, who has worked with Gass the past six years, noted that Gass’ contributions have helped the district have a high-performance policy governance model. Baker also praised the district’s achievements in early childhood education, telling Gass, “I can tie that directly to you and the leadership you set.”

Gass said the outpouring of support means the community supports the work the school district has done in recent years.

“The school district is listening to the community and I think it is addressing the education needs of the community,” Gass said. “I think them coming out to support my retirement is really to support the district and the job they’re doing.”